Amber Clinic – In the news

Providing a new lease of life

From the age of three weeks, she kept getting a recurring chest infection, which would then turn into pneumonia. She would have a terrible, barking cough – literally, like a dog barking. She was sick every six weeks, and was hospitalised with pneumonia four times. This continued from then until the time we went to the Amber Centre, last May.”

Joan Reid, from Naas, is discussing her daughter Jean. Now seven years old, Jean has had recurring problems almost from the moment she was born. Passed around between consultants, immunologists and other specialists, no one seemed to be able to help her. Jean’s parents were forced to watch as their daughter became progressively sicker with each bout of illness.

“No one knew for sure what was wrong – nobody could tell us. She was tested for a variety of illnesses and conditions but all of the tests were negative.” However, help was closer to hand than Joan may have realised.

“A friend told me about Alma Green at the Amber Centre in Mullingar”, continues Joan. “I was initially reluctant to visit, as I’d been to virtually everyone at that point, without success. However, we did visit, and Alma told us that Jean had a number of toxins in her body.

“No one knew for sure what was wrong – nobody could tell us. She was tested for a variety of illnesses and conditions but all of the tests were negative”

“We started the treatment, of course. Sure enough, six months later, she was much, much better. The toxicity had cleared. Her health has improved so much – she got a few doses during the winter, as always, but this has been the first winter where everything was fine. I did maintain the low-dose antibiotic that she was pre-scribed by her hospital consultant too, just to ward off any signs of pneumonia. This will be rechecked again as spring progresses. She’s doing so well with the Amber Centre holistic treatment, that she can clear any problems herself now.”

“Jean is now on a variety of homeopathic drops and tablets, for the problems, and to build up her immune system. Anytime there is a problem, Alma is brilliant. I know that I can call her anytime, and she will help me.”

The Amber Clinic, is dedicated to helping people with a whole host of problems and concerns. Clients come to the clinic with complaints such as unexplained pain, depression, chronic fatigue, and other conditions caused by hitherto undiagnosed toxins.

Through a variety of therapies, Alma Green and the team at The Amber Centre have been successfully helping people to overcome their illnesses and get on with their lives, free from pain and anxiety.

“I also went to Alma with my own problems – I was stressed and so tired, and had cold sores,’ says Joan Reid. ‘After the three month treatment, I’m a new woman. My husband has also been helped with headaches and back pain. It’s amazing.”

Allergy testing of 950 different potential problems will help to get to the root of such issues. The test does not involve skin pricks, so can be used by everyone, including babies. Besides actually testing, advice is also available on how to deal with allergies so that flare-ups can be avoided.

Obviously, the first place to start is to have a consultation. “I nervously met with Alma on my first appointment,” says one client, “I explained how stupid I felt, but was astounded by the way Alma did not judge me, nor agree with me, but ensured I left her clinic feeling like a new woman.” 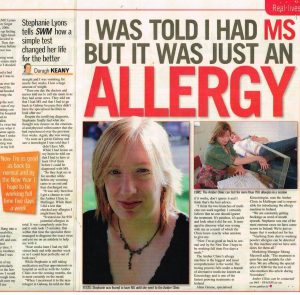 I was told I had MS, but it was just an ALLERGY

Stephanie Lyons tells, Daragh Keany of the SWM, how a simple test changed her life for the better.
Stephanie Lyons will never forget May 16th 2006.
“I woke up feeling slightly light-headed but decided to go to work regardless. Then during the day I fainted twice before I noticed that my balance was off”, she tells SWM.

“Then when my hearing went in my left ear and my vision started to become blurry, I decided to go to the doctor”.

Thinking that she was over the worst, Stephanie followed that medic’s instructions and headed off for home – how wrong she was.

She says: “I woke up the next day and I couldn’t see out of my left eye and I was vomiting continuously. So I headed to hospital before being transferred to Galway to see a specialist. They thought I had a virus but they weren’t exactly sure what it was so they sent me home again. But the next day when I woke up I found myself even dizzier, still vomiting, my hearing was now completely gone in my ear and my eyesight was going in my left eye”.

This time around they sent me for a CAT scan and two MRI scans. They kept me in hospital for over a month as they tried to figure out what was wrong with me”.
“While the vertigo medication was helping to some extent, it wasn’t doing anything for my hearing or my eyesight”.

Like anyone who is flung into a complete state of vulnerability, Stephanie started to think the worst as thoughts of MS and cancer ran through her mind.
“It was such a lonely time. I had my parents and my brothers and sister around me but I was still lonely. Without the support of my family and friends, particularly my aunt and the staff in the hospitals, I don’t know how I would have got through this tough time.”

“I had to wear a patch over my left eye so that I could see straight and I was vomiting for nearly five weeks. I lost a huge amount of weight.”

“Then one day the doctors and nurses told me to call my mum in as they had some news. They told me that I had MS and that I had to go back to Galway because they didn’t have the specialised facilities to look after me.”

Despite the terrifying diagnosis, Stephanie finally had what she thought was closure on the emotional and physical rollercoaster that she had experienced over the previous four weeks. Again, she was wrong.

“As soon as I got to Galway and saw a neurologist I was told that I didn’t have MS. While I had lesion on my brain he told me that I had to have at least 10 of them before I could be diagnosed with MS. So they kept me in for another while before my vomiting came to an end and then discharged me.”

It was only then that I got a chance to visit the Amber Cente in Mullingar. While there I did a test that checked any allergies I might have had. It tested me for 950 potential allergies in total. It was completely pain-free and it only took 15 minutes. Four weeks later I had my full vision back and with another week or so I could hear perfectly out of both ears.”

While Stephanie is still taking medication and has appointments in hospital as well as with the Amber Centre over the coming months, she is most certainly on the mend.

“When I mentioned it to the neurologist in Galway, he told me that if it works, don’t ignore it and I think that’s the best advice.” “I think the two can work together. I certainly believe that no one should ignore the treatment. It’s painless, it’s quick, and look what it did for me”.
“Now I’m as good as back to normal and by the New Year I hope to be working full time five days a week.”

The Amber Centre’s allergy test is the biggest and most comprehensive that we know of. The testing process falls under a branch of alternative medicine known as Kinesiology and is one of the fastest growing therapies in Ireland.

Alma Green, a Kinesiologist, runs the Amber Centre in Mullingar and is responsible for introducing the allergy test to Ireland. “We are constantly getting bookings as word of mouth spreads. Stephanie was one of the most extreme cases we have come across in Ireland. We’re just so happy that it worked out for her“. The treatment is pain free and is suitable for children as it is non invasive and the skin is not punctured.

The Amber Clinic can be contacted on (044) 93 44388 and their website for further information is www.amber.ie